I never used the Weapon vs Armor tables in the AD&D Player's Handbook. Mostly because I find the chart really overwhelming with all 44 rows of weapons and 9 columns of armor. I also didn't know what to do when characters were fighting monsters that didn't have "weapons" and "armor" per se.

However, if we limit the number of weapons to the 19 in B/X D&D, and only include 4 columns for armor (Plate, Chain, Leather and Unarmored) it becomes a bit more manageable. And if instead of being a chart of modifiers we apply them to the numbers from the attack matrixes... we end up with a chart showing what you need to roll to hit the different types of armor using the different weapons. 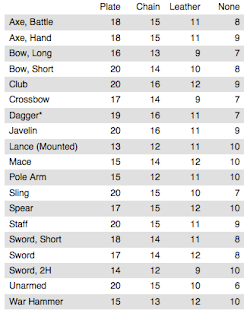 These are all the same numbers from AD&D and B/X - I've just presented them differently.

It's a bit more detail than I've been using lately... but I have to admit I do like the choices in weapons making more of a difference and Plate armor generally offering better protecting than the 16+ to hit number it has without any of these modifiers being used.

It now makes sense to use a Warhammer if you're going up against an armored opponent (this would have been true in the middle ages) and there's even a reason you might decide to punch, kick or headbutt an unarmored enemy rather than use your weapon.

What do you think? Would you use the Weapon vs AC numbers now?