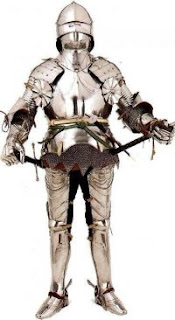 Lord Folderoy is venturing out onto the battlefield for the very first time. He would like to be one of the guys and have some Saturday fun dispatching a few uppity peasants. He's not much in the way of being a trained warrior, but he's rich so to keep himself safe he dons the best armour money can buy (see picture).

He hits the peasants on a d20 roll of 11+ (50%) and his War Hammer does d6 damage (assume a kill on a hit).  The peasants hit him on a d20 roll of 17+ (20%) and their wooden clubs do d4 damage. Lord Folderoy only has 3 hit points since he's a regular untrained noble. He has brought his 6 hit points Man-at-Arms with him (wearing similar armor), and he will on average be killed after 2 hits.

The odds seem really high that a small number of peasants (3) would be more likely to kill Lord Folderoy than he would them. Twice that number (6) would be enough to kill both the Lord and his Man-at-Arms.

I don't know if this sounds right based on what I've read about Medieval History. Is a Peasant with a wooden club any real threat to even an untrained Nobleman or Man-at-Arms wearing heavy armour?

Deadliest Warrior never does match-ups like Knight vs Group of Peasants but if they did I would imagine the heavy armor would be a lot more effective than we see in the rules.