Wandering monsters have fallen from favor in more recent versions of the game and are usually found only in "old school" adventures. The reasons people cite for not liking the rules for wandering monsters are most commonly "checking every turn means they show up too often" and "they just add more unnecessary combat without adding anything to the game".

After looking at dungeon design and how light works in the game, I thought I'd spend some time looking at how Wandering Monsters actually work in the Moldvay edition of Basic D&D (which isn't completely how I *thought* they did).

First we see how often Wandering Monsters appear:
So rather than once a turn (which is what I thought the rule is) it's actually once every THREE turns, since I wouldn't check during the turn the Wandering Monster is appearing.  This is less often than I thought.

However in some areas you would check more often:
I think it's important that players somehow be able to make choices about whether to remain in a high-traffic area or not, and for that they need to be able to predict which areas will have more wandering monsters than others.

In addition to this Wandering Monster frequency will be affected by the choices the behaviour of the adventuring party:
The rules don't say how infrequently to check for Wandering Monsters if the party is quietly waiting in an out-of-the-way place but it would need to be less than once every 30 minutes. Perhaps a check once an hour? Maybe once every 1-3 hours?

Also important to note is the distance at which a wandering monster is encountered. 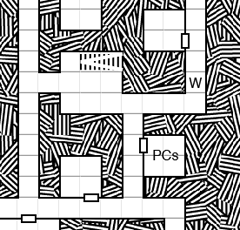 If the characters are in a 20'x20' room and the monster is 70' away it's reasonable to assume that while it may pass by the door of the room as it goes about it's business, there's no reason to assume it will automatically try to enter the room the party is in!  The players choice of what sort of room to rest in will be an important strategic decision.

It's also possible that the party may somehow detect the approach of the monster and find a way of avoiding it, or even scaring it off.

When determining the exact Monster encountered it's worth noting:
So there's nor reason to have monsters appear beyond a trapped area if it doesn't make sense to you that they could be there.

Examples also mention the possibility of encountering bats or rats (which aren't always dangerous encounters) as well as providing some example tables that include Lawfully aligned Dwarf, Gnome, and Halfling encounters as well as encounters with Acolytes and Traders who could be any Alignment. Certainly every time a Wandering "Monster" appears the intention isn't that there will be a combat encounter.

So there's more to wandering monsters rolling a d6 each turn and starting combat if the result is a 1.

Like Light in the Dungeon I think these rules may not be used completely by a large number of groups, but in omitting them an important strategic element of the game is being removed as well.