My friend Nate over at Rivenshield and I were chatting the other night about the dungeon adventure he'd just run for his group and some of the adventures I've run recently. This got me thinking about some of the techniques I use when creating an adventure map and I thought I'd share them here.

One of the most important things to keep in mind when making a dungeon map for classic D&D is that characters can't see very far! It's easy to forget this when describing the length of hallways and sizes of rooms, but it makes a really big difference when you take this into account when designing your maps.

From the Moldvay edition of Basic D&D (the one I'm most partial to) we find that:


So unless you've got a party consisting entirely of Elves and Dwarves, or you have a character acting as a scout ahead of the rest of the party (which my players did once… but only to check around a single corner) then you will be working with torches, lanterns and magic for light:

So that means the characters will usually be able to see 30' in all directions. 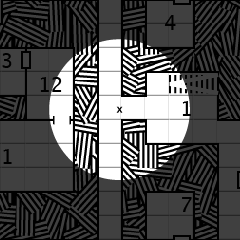 When designing your dungeon map you want to keep that 30' in mind when creating hallways and rooms.  If you create a split in the passageway where there are no doors, corners or side-passages for at least 30' in either direction you'll be describing the hallway leading into darkness in both directions. Without any other description about sounds, smells or other factors to help the players differentiate the choices you're asking them to make an arbitrary decision. Left or Right?

These kind of choices can be useful near the beginning of your map or some very memorable landmark (here you can see it next to room #1 and the stairs into the dungeon) to divide the dungeon map into regions.  In this case it's less about the choice you initially present them with and rather a later choice: do we stay in the region we've been exploring, or move to a new area?

Splitting a dungeon map into these sorts of regions works best when there's some kind of thematic difference between them.  The North area is occupied by more intelligent monsters. The Crypt area and undead are to the south, etc. 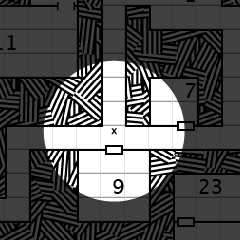 The more frequent type of choice you probably want to present your players with is one where there's some kind of difference in what they can see 30' in each direction when they come to a crossroads.

Without more information these kind of choices may be a little less arbitrary (Left or Right?) but they can be still somewhat uninformed. It's worth thinking about the kind of description you'll give the players at these crossroads and subtle clues that might hint at what they'll encounter by making different choices. Some doors might look well used, while others might be covered in cobwebs. Some passages might be swept clean, while others are littered with debris or even signs that something was dragged off.

If you are making regular checks for wandering monsters your players may be more inclined to check rooms more often than simply wander about hallways. If a wandering monster is indicated and the characters are in a room then the creature may pass by without discovering the part, whereas if they are in a hallway the light from their lanterns will reveal them to the creature from a distance. Even if the creature does end up entering the room they're in it might be surprised instead of automatically having the upper hand and attempting it's own surprise attack if encountered in the hall. It's worth remembering that some beast like creatures won't be able to open doors on their own! 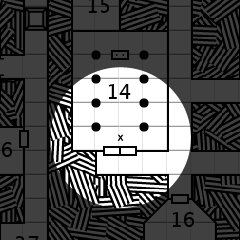 One more thing to consider when designing a dungeon map and thinking about light and distances is larger rooms. If you routinely tell players they've entered a 30' x 40' room you should consider that depending on the room the players may only see some of the walls with the far corners remaining in darkness. This can make a considerable difference if there are monsters, traps or treasure in the room  (here you can see that the altar, and hidden monster encounter, remains in darkness). Players will not only need to decide to investigate the door outside, but also decide to enter the room and look around before all of it's contents will be revealed. If the room has columns, tapestries, stalagmites and stalactites or other types of obstacles this can further obscure things from view and require more careful exploration before everything is revealed.

That's all for now. Hopefully this is helpful to someone out there and they decide to make a dungeon map full of interesting choices for their next adventure. :)