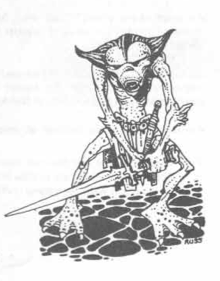 This is the Meazel. Watch it run in slow motion...

The Meazel is another Fiend Folio monster. This time we have a solitary 4 HD creature that's slightly smaller than a man. It's stealthy, has a "nasty reputation" and despite being drawn with a sword either attacks with it's claws or with a crazy super garrotte attack that is lethal in 2 rounds (!) unless the Meazel is killed or the character breaks free (how? who really knows). It's called a Meazel because it has nasty acne (which isn't contagious) so other monsters don't invite it to join in their reindeer games.

It's not terrible... but still could be improved I think.

Meazel is the name given to a creature that was once a man, but that is infected with a horrible underworld illness. Tainted food consumed in a dungeon can cause some men to develop angry red patches on their skin, and their minds to become clouded with an unnatural hunger for human flesh. Initially a Meazel may use bandages to try to hide their illness from others and wield a melee weapon or garrotte to attack their victims. As the madness progresses a Meazel gains a monstrous strength and becomes oblivious to pain, clawing and choking their victims with their bare hands. When they can no longer hide their true nature they are either destroyed or driven to the fringes of civilization where they dwell in swamps, forests, or dungeons.


Oh, look it's chasing things, and eating them!

For stats we'll keep the 4HD but increase the unarmed damage to D6. The Meazel will also be immune to poison as well as sleep, charm, fear and similar mind affecting abilities.

It doesn't care about being stung by bees.


Now it's a scary monster AND the players will be nervous about eating in the dungeon. :)