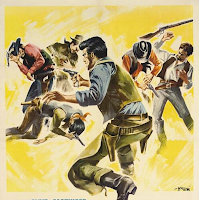 Since combat in the Weird West is abstracted and won't involve characters actually being shot, stabbed, or mangled until they reach 0 stamina, there needs to be some way to differentiate between "everything is fine" and "dead".

Players must make a Death Check for their character for each additional lethal attack that would cause stamina loss while at 0 stamina.

Both an exceptional health attribute and being a Fighter will modify this die roll.


Do you think this will provide too much of a safety net for characters? I've backed off of the luck points idea because of that. I feel that it's still "very bad" when you get brought to 0 stamina and players won't be cavalier about combat, which I was worried about with the luck points. Keep Luck points and only let players get a Death Check roll if they haven't spend their's?

Does this add something substantial? Is a simple "Dead at 0" better? Will allowing for wounded characters make the game more interesting? Let me know what you think. :)