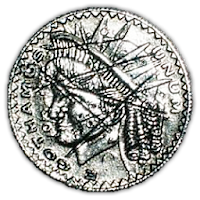 I like the idea of Luck Points as a resource players can use to keep their character alive in the game, or modify a run of bad luck with dice rolling. I'd thought about adopting Jeff Rients' d30 rule where once per game any dice can be exchanged for a d30... but felt a party with 5d30 worth of attacks might not feel as threatened by the Monsters in my campaign world... so I eventually decided on something different.

I also wanted to give control to the player over whether or not character death was on or off the table for them, and make that clear to everyone at the table (including the DM) without removing the tension from the game completely. Here's what I've come up with:

Every player gets one Luck Point per game session. As long as the player does not spend this luck point their character can not be killed or otherwise permanently removed from the game. When reduced to 0 Stamina this character is instead knocked unconscious, captured, trapped under rubble, or whatever else would remove them from the encounter but not permanently from the game itself.

Once a player has spent their Luck Point however, their character can be killed or permanently removed from the game according to the regular game rules. In this way each player can decide whether or not their character is at risk of being killed as part of the adventure.


I'd thought of making it one point per level, but decided one per game session would just be easier to keep track of. It would also give more control to the players over their character in the campaign so that if someone had a bad day they might prefer to use the lifejacket instead of the luckpoint - even though they usually use that point early in the adventure.