I've decided to reboot the short lived column of monster makeovers I started last year when we took silly monsters like The Flumph and The Displacerbeast and made them awesome. This time round at the suggestion of Johnathan Bingham we're going to look at a monster that at first glance is *very* silly: The Morkoth. 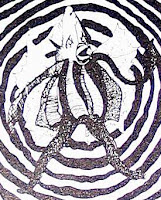 This is another monster that suffered from artwork that took a concept that could be quite creepy and makes it laughable. I mean... it looked like someone in a bad 4-legged squid costume with some kind of recycled parakeet mask. How could that be scary, right?  It's also only encountered in it's lair at the bottom of the ocean... inside a maze-like cave... which seems very unlikely for the average group of adventurers to ever visit. Ever.  Just to add insult to injury, back in the 80s it's name would make you think of Mork from Ork. Nanoo Nanoo.

This is a bad monster, and I doubt there are many stories of people having used it in a game. Ever.

Morkoth is actually a pretty good name. It's similar to Morgoth which is the greater power that Sauron served in The Lord of the Rings. Morkoth sounds evil and menacing -- although this isn't the kind of creature that makes itself known to players right away, so they won't be calling it by name until they've been dealing with it for a while. No change to the name then.

The picture has to go though, it's just too silly. And since it's described as "possibly humanoid, but reports vary" then perhaps the creature can change it's shape, or it's charm spell makes it's victims think the Morkoth is the same species they are, rather than the monster that it is.

This thing is both Chaotic Evil and exceptionally intelligent. A great white shark wants to eat all the time, and would love to chow down on some adventurers swimming about in the ocean, but it's just an animal and not "evil". A Pitcher plant lures insects into it's "maze like" interior where they're drawn to the center and devoured -- but it's not even sentient at all, it's a plant!  So the Morkoth has to be doing something more than luring creatures into its lair to eat them. Clever things. Evil things.

This being is smarter than the Merpeople, Sea Hags, the Sahaugin, even the Sea Elves. It can reflect spells back at the caster, and if you enter it's lair it casts a Charm Person spell on you. Considering it's intelligence and spell casting it only makes sense to infer that it could be able to cast other spells as well. A powerful undersea spellcaster which lures creatures into it's lair and charms them - either to be eaten at it's leisure... or perhaps to be sent back out to further the creatures goals. This would certainly include luring other creatures to the Morkoth's lair for them to also fall under the creature's spell.  In this way the creature could slowly take over an entire nearby community, even becoming the focal point of a marine based cult. A steady supply of willing victims and other offerings brought to satisfy it's desires.

Since this highly intelligent creature is chaotic and evil it's malevolent plans would extend beyond simply satisfying it's hunger. It might relish the cruelty it causes, possibly finding satisfaction in destruction beyond the victims brought into it's lair. Wrecking ships on jagged rocks, sending marine predators to attack human swimmers, or grander more diabolical schemes are all possible sources of entertainment for a Morkoth.

If we assume the Morkoth casts spells equal to at least a 7th level wizard (to match it's Hit Dice) it has access to 4th level spells and could use things like Polymorph, Curse, Water breathing (to bring humans into it's lair to be charmed), and Clairaudience, Clairvoyance and even Wizards Eye. A Morkoth would greatly covet magic such as a crystal ball which would let it extend it's reach without leaving it's watery lair.

Now, far from seeming like a useless and silly monster the Morkoth could be a major villain in a campaign. Perhaps the adventurers stumble upon an Innsmouth style village that has fallen under the creatures control, or the Sea Elves inexplicably wage war on a peaceful fishing village and demand the people pay tribute in the form of human victims to their monstrous controller.

Ursula the Sea-Witch from 'The Little Mermaid' could be the inspiration for a Morkoth. So too could a more Lovecraftian being.