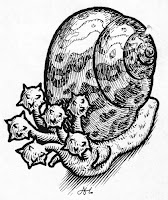 The Flail Snail is another Fiend Folio monster which originally appeared in the pages of White Dwarf Magazine's Fiend Factory. It seems there were quite a few Joke Name monsters like the 'Dahdi' which is the husband of a 'Mummy' (get it?) and the Flail Snail would likely be a great monster if your fantasy world was based on Piers Anthony and filled with Spear Deers, Halberd-Birds and other puntastic fantastic creatures.

Even setting aside the silliness of the name / premise this monster was effectively a slow moving (3") group of 4-6 Fighters of 4-6th level with Sword, Chainmail & Shield and dragging 5,000gp worth of treasure behind them. If you destroy all of the 'flails' the snail then spends between 10 and 30 minutes *crying* inside it's shell and attracting some kind of wandering monster. A lot of groups would be happy to encounter these things and attack them with little hesitation.

Now, what if we assume the illustration of the monster is reasonably accurate, and maybe even that the locals think those things on it's head DO look like flails - but we make some changes to what the creature is actually all about...

Something else exists in nature which looks a little like the flail snail -- Drosera, commonly known as a Sundew, a type of carnivorous plant. The Sundew attracts insects with a sweet smelling secretions that they stick to, and then are digested by and absorbed into the plant. The plant actually curls around the insect to bring more of it's grandular tentacles into contact with it's prey. The grandular tentacles of the Sundew actually look a lot like the eyestalks of a snail.

So what if the 'Flail Snail' isn't waving about melee weapons, but giant sticky tentacles that trap it's prey and start digesting them? What if those enzymes also caused paralysis to keep larger, possibly humanoid, prey from attempting to escape?

We could give it 8 melee attacks a round like a Carrion Crawler, and a hit would similarly require a saving throw vs Paralysis. This would wear off if a Cure light wounds spell is cast on the victim or 20-80 minutes after being freed from the tentacles... just like the Crawler. But in this case any paralyzed character is also stuck to the creature and can not be freed until the snail is killed. The terror of being stuck to a giant carnivorous snail would turn to abject horror if the snail were to pull itself -- and it's victims -- inside it's shell.

You would add in ongoing damage, say another 1d8 hit points per turn (or round if you're feeling nasty) for victims and keep the nearly impervious Shell (-8 AC / Magic Resistant) and you've now got a very scary enemy.  Quite horrifying if characters are trapped inside being digested!  I think you could keep the "crying" bit -- but change it to a high-pitched buzzing noise the creature can make when it's attacked (maybe like the drone of a Cicada) that attracts wandering monsters.

After this Monster Make-over I think we've actually turned the Flail Snail into something quite frightening.