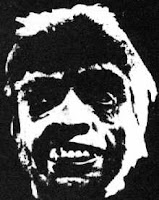 In fantasy games I want magic to feel mysterious and dangerous. I like the idea of spells and magic items offering greater power but often at some sort of risk, so that using magic feels unpredictable and less mundane. Magic in games can be very predictable in it's result and feel more like technology. Some players will even refer to it in those terms (eg. Sleep Spell = Bazooka, Wizard = Artillery, etc) which isn't exactly what I want from the fantasy genre.

Here's an example of a potion from Labyrinth Lord:


Polymorph (self): This potion grants the spell-like ability of polymorph self, as the fourth level magic-user and elf spell.

And here is the spell description from S&W (because it's shorter than the LL entry:


The caster assumes the form of any object or creature, gaining the new form’s attributes (the use of wings, for example), but not its hit points or combat abilities. The Referee might allow the benefit of the new form’s armor class, if it is due to heavily armored skin. A great deal of the spell’s effect is left to the Referee to decide.

Very handy in lots of situations. Like a swiss army knife. No reason to think twice about drinking this potion!

But since it's left up to the Referee to decide, here's how I used this in a game I ran.


Being transformed into a Bugbear might make you stronger and stealthier... but it will also make you meaner as well. Just like a real Bugbear.

And with those details our handy swiss army knife potion becomes something much more interesting -- and sinister. It's basically the Mr. Hyde formula now.

Maybe there's enough potion there for a few transformations...