Do the Wight Thing 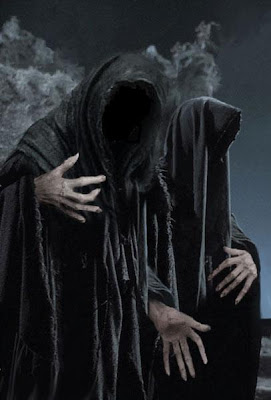 I I tend to use the undead in a lot of my games, probably because I like movies with zombies and vampires in them and I generally find the concept to be scary. While looking through some of my game books and thinking about new ways of presenting these classic monsters I found myself getting a bit confused about the list of undead in D&D. Aside from looking at their stats there were a few that I really couldn't tell apart. If you're changing the look of the monsters to something a bit different then should you start with one creature or another?  Outside of the rules of Dungeons and Dragons, what's the difference between a Wight, a Wraith, and a Spectre? What about a Ghoul and a Wight? Or a Ghost and a Spectre? What monster would you use for a Nazgul or Dementor?

I asked this question on Twitter and had some really good suggestions and feedback. It looks like I'm not the only person who found this a bit of a puzzling topic so I thought I'd share the breakdown that I came up with.

What these monsters look like, how they behave, what they 'eat', if they are 'contagious' and how they move will depend on the campaign, but this breakdown will help me figure out what monster to start with a bit more quickly.

The Nazgul from The Lord of the Rings would be Wraiths (Ring Wraiths to be specific).
A Dementor from Harry Potter would also be a Wraith (that can fly) unless they were Incorporeal (I don't recall) in which case it would be a Spectre.
George Romero's Night of the Living Dead undead would be Zombies.
28 Days Later and Zombieland undead would be Ghouls.
Bubba Hotep would be a Mummy (obviously) which is a variant of the Wight. So similar monsters might be Wights as well.
The 'undead' in the Doctor Who episode The Waters of Mars would be Ghouls.
The Crow from the movie of the same name would be a variant Wraith.