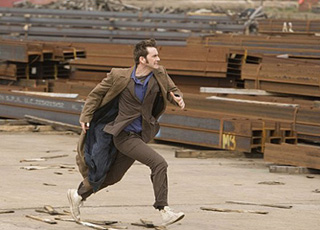 Thinking more about running in my game and after some good feedback from Timeshadows and Zzarchov I've come up with the following system.

They're based on the dice-step system we use a lot in our games where the highest roll succeeds and there is a possibility for ties. Winning a round of dice rolls means you move an abstracted set closer or further from your adversary (depending on whether you're fleeing or pursuing). Alternately if being pursued by a monster that is significantly faster (eg. you're on foot being chased by a Black Rider) then you may be required to win 3 or more times before your opponent or you'll be caught.

Characters roll a d6 for running modified up "one step" for the following:


and modified down "one step" for the following:


If the character has a Strength bonus they can ignore one penalty from carrying a heavy object, armour or shield.

This means a 2nd Level adventurer running from a 1st Level monster might roll as much as a d10 if they are Quick and not wearing armour or carrying items. Conversely they may roll as little as a d1* (aka "always 1") if they aren't Strong and have opted to try running in Platemail while carrying a shield and wearing a backpack full of gear.  That second scenario might mean they're ready for anything... except running away. They might be wise to drop their backpack and shield first. :)