The Brigands of King's Road

The King’s Road winds through the countryside towards the great walled city of Drakenghast. This was once a busy trade route for merchants carrying silks and spices from the south lands, and the faithful traveling in search of holy shrines. The wide cobble surface was built in ages past and have been worn smooth by countless years of boots, hooves and wagon wheels. 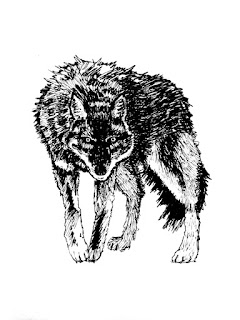 Now that the drums of war are growing louder, the road is eerily quiet. There are rarely caravans from the south anymore and only the bravest would consider a pilgrimage when so few are returning. Since the soldiers who once patrolled the highways were needed in the borderlands, those who travel the King’s Road now do so at their own risk. Bands of brigands and sometimes worse things threaten those who make the trip by themselves.

The most dangerous places on the road are where one must pass through small thickets of broadleaf and pine trees, or where the road dips down into a hollow. It’s at one of these places where your adventurers have the following encounter.

You’ve been traveling the King’s Road for most of the day and are eager to reach an Inn where you can rest your feet, have a hot meal, and a cold mug of ale. Ahead of you, near a small thicket, you can see a small peddler’s pushcart lying on its side on the cobblestones. A few apples lie scattered across the road. The peddler, a short wiry man wearing a colorful oversized vest, is trying to fix the broken wheel of his cart.

If the adventurers stay on the road the man will see them and nervously smile with crooked teeth that seem too large for his mouth. He cautiously calls out to the adventurers and asks if they might be able to help him with his cart. If the PCs agree he introduces himself as Tavarius and says that he was taking apples from his orchard to Drakenghast to sell at the market. If the PCs are dismissive or hostile he will stay with his cart until they pass, or attempt to flee if he is in danger.

While it’s reasonable to expect that the players will be wary of him, Tavarius is not a brigand or any sort of monster. He’s just a simple apple peddler with bad luck. Unfortunately for him and the adventurers, there are some actual highwaymen lurking nearby in the thicket. They recognized that Tavarius was unlikely to have many coins and were biding their time to see if more wealthy looking travelers would appear. Once the PCs are distracted helping Tavarius with his cart or are about to walk past and leave, they step out of hiding.

Rough looking men rush out from the thicket of trees brandishing heavy wooden clubs. They wear torn and stained gambesons over mud-spattered and ragged clothing. Grigor their leader, a heavyset man with a crooked nose, sneers, and demands you hand over your valuables.

Unless the players have said they are watching the thicket for an ambush have them check to see if they are surprised. If they fail this check they lose their action for the first round as the brigands emerge from the trees and demand everyone hands over their valuables. If you are using readied actions in your game the brigands will attack the party if anyone draws a weapon or moves to attack them.

The 4 brigands (AC 7, HD 1, hp 5, 4, 3, 3, MV 120' (40'), #AT 1, D 1-4, Save T: 1, ML 8, AL Chaotic) will fight if the players decide to resist them, but will attempt to flee once two of their number has been killed or incapacitated. They are known criminals who have been waylaying and occasionally murdering travelers on this stretch of road for the past fortnight. They have a small campsite a quarter mile from the road where they have left some blankets and personal belongings of little value.

Tavarius (AC 9, HD 0, hp 2 MV 120' (40'), #AT 1, D 1-4, Save Normal Human, ML 6, AL Lawful) is automatically surprised on the first round and then will follow whatever action the players are taking and help them in any combat. He fights with his broken cartwheel like a club. Once he joins any combat he will begin screaming wildly and shouting that “You’ll never get my apples! I’ll kill ya! I’ll kill ya!”. He gains +2 on to-hit rolls and does not need to check morale. He will not attack the players but will continue screaming for 1 round after the battle has ended. Prolonged exposure to blighted fruit has lead to his “Apple Madness”.

If the Brigands are defeated and Tavarius survives he will realize his cartwheel has been smashed beyond repair. After he’s stopped screaming and he catches his breath he’ll sheepishly apologise with “Sorry about that. I don’t know what came over me.” With a sigh he’ll try dragging his broken cart along the road in the direction of the city. He will be most grateful if the PCs do anything to help him. He has little money but will offer apples to any traveling companions.

The apples from Tavarius' orchard are small, tart, and several have spots of greyish blight on them. They will fetch a poor price at the market, and anyone who eats enough of them will find the blight starts to affect their health and judgment. With little money and failing crops, Tavarius eats a lot of these apples and makes apple cider with them. He carries a small jug of the beverage with him and will stop to quench his thirst before the group reaches the city.

Lawful or Good characters who help Tavarius reach the city safely gain 50 XP. Lawful characters who bring one or more Brigands to the authorities in the city gain 50 XP. If the group brings Grigor to the city and turns him over to the authorities they can collect a 25 gold piece. Once the session is completed make a point of asking which players ate apples or drank some of Tavarius' cider.