Unlike the way "Evolution" gets bandied about by marketing teams to describe how their new product is superior to an older one, I really do think you can see a genuine evolution of supplemental game mechanics for OD&D between Arduin of 1977 and the things you're seeing being published online more recently.

How we present data has changed. Our ideas about randomness, balance, and fairness have changed. Consistency in presentation and approaches to layout have change. Even social concept regarding race and gender have changed. But if we can try and peer through those differences we see a lot of similar concepts to some of the "new" things we've been seeing in the last year or so. Certainly Arduin's blend of Sci-Fi and Fantasy seems to be coming back en vogue.

So far one of my favourite things I've found in Arduin is the random special abilities charts. Except that they I also think they're terrible. So much of this book is like that, and even trying to sort the good, from the bad, from the ugly seems a challenging task.

These charts provide a fast and easy way to add more depth to characters so that each Fighting Man or Magic User will feel a little more different from the others. They also introduce more of the implied setting through character creation so that players are aware of there being Mountain Men, Desert Dwellers, Horse Riding Cultures, and people who might have dark secrets or inhuman origins.

Since this is all random a lot of the more interesting options may never come up through fair play, and since there is a lot of imbalance in these abilities (+2 to all abilities for one character, and -8 on saving throws vs fear for another) it seems there would be a greater chance for unfair character generation (any way you look at it).

Some of the abilities also lack any easily discernible context as well and are perhaps only a grab bag of unrelated benefits and flaws. For example:  +1 with all axes, -3 versus all dragon breath. Does this represent a Viking culture that's good with axes but fearful of dragons? Maybe. And some can be explained like that. Others like +2 resistant to all undead attacks, but -2 to all missile attacks seems terribly arbitrary.

There are a great number of these random abilities that I think would end up being very disruptive in play. I think we've collectively learned a lot about being better players and GMs over the years and looking at some of these abilities they seem like a recipe for player vs player combat and a very short campaign. For example:

* Religious fanatic, -4 charisma and an inability to work with "pagans."
* You hate mages, therefore add +3 to all magical saves. You kill them.
* You are a secret were-creature, roll to see what kind. (and 98% chance you will be chaotic, and a further 50% chance to be evil)

I think this can work alright with a mature and easy-going group, but I wouldn't trust this to a pick-up or Con game.

What would I take from these charts? I think they show the early desire for greater mechanical customization of a character, and demonstrate the effectiveness of expressing a setting through character creation options. I can see that being something I will definitely use more in the future. As for these charts "as is", I can't see myself using them.

What do you think?  Here's an example of one of the charts for our scholarly review (and in case you've never had a chance to look at this long out of print book): 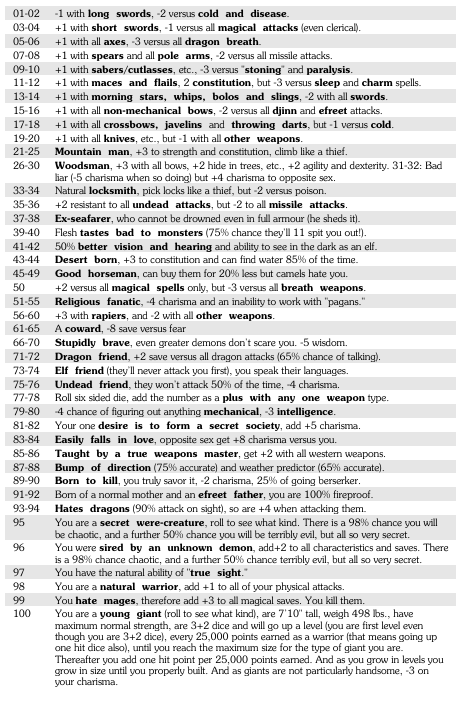 To be clear: I spent a couple of minutes tidying the chart up so that it's a little bit easier to read. ;)