In Defence of the Shield: Redux 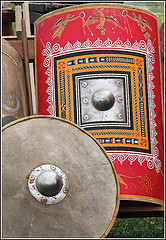 After I mentioned that the Shield is woefully less useful in D&D than it was in historical hand-to-hand combat a few other people have shared their suggestions for improving it.

Back in 2009 I wrote a post that didn't get a lot of notice at the time, but that we used in our Ancient Academy game and I think worked fairly well: In Defence of the Shield.


If you'd rather use something a bit simpler, here's a revised AC chart based on JD's initial suggestion:


Only the lighter armor types change their AC value as historically the shield played a diminished role once heavy plate armor became common in the late middle-ages.

Both of these house rules will let you make shields a bit more important in your game, without moving things too far away from the original combat systems.