Facedancers for Swords and Wizardry 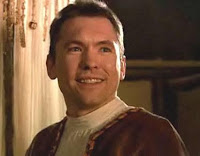 A friend on Twitter asked if I was going to include the Facedancer in my series of posts of Dune material for D&D / Swords & Wizardry. Personally, I found the original book a lot more enjoyable than the sequels, and liked the David Lynch movie much more than the general public (and movie critics) seemed to. So I had planned on focusing on the original novel / movie more than the sequels.

But the Bene Tleilaxu Face Dancers are a neat part of the Dune world, and I think they're one of the easier things to adapt to Swords & Wizardry:

With our philosophy of only add / change / remove material when absolutely necessary… I just don't see much reason not to use the Doppleganger for a Facedancer.

I'd perhaps give them a normal human movement rate of 12" (instead of 9") and lose their natural 1d12 claw attack and high AC… but otherwise isn't that what a Facedancer is: A Doppleganger?

Once again, it would be easy to add a "new" monster and create a stat block for it and add to the overall bulk of the game... but is that really necessary? Then again, I'd boil down the S&W to something like this anyway:


Anything that's not listed is assumed to be "human standard" (AC 9, Movement 12", etc). There's no reason to list most monsters as having a movement of 12"... just list that info for the ones that don't.