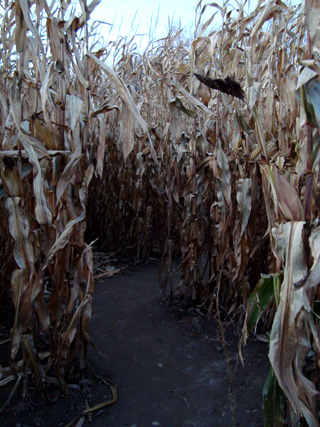 We took the kids to the Corn Maze last night and spent an hour wandering through the twisting pathways in the gathering darkness. We had a good time, and it was actually my first experience with exploring a maze of that size (6 Acres). Taking a group of young children through the maze both in good lighting, twilight, and darkness made me think about all those imagination games of "explore someplace dark and spooky" I've played over the years.

Without some measure of discipline a group wandering through a maze, or really anywhere, will tend to switch their order around a bit. You might have some people who are very eager and out in front of the group a bit, and some others who tend to doddle at the back. The less disciplined (wisdom) and orderly (lawful) a group the less consistent their marching order will be.

Here are some quick game rules for this:

LAWFUL Characters: Players can choose where in the marching order their character will always be -- Front, Middle or Back, or which other character they will be following.

NEUTRAL Characters: Players can choose where in the marching order their character will be like a LAWFUL Character -- but only if there is a Lawful leader in the group. They may alternately have their character behave in the same manner as a CHAOTIC character.

CHAOTIC Characters: Unless a NEUTRAL or LAWFUL character is "supervising" their position in some way, they will be at a random place in the marching order. Determine randomly whenever necessary (encounters, traps, etc)

WISDOM: Characters with a Wisdom penalty will behave as if one "step" closer to Chaotic, while those with a Wisdom bonus can choose to behave as if one "step" closer to Lawful. For example a Lawful character with low Wisdom needs a leader to help them maintain their marching order, while a Neutral character with high Wisdom can behave in the same manner as a Lawful character.