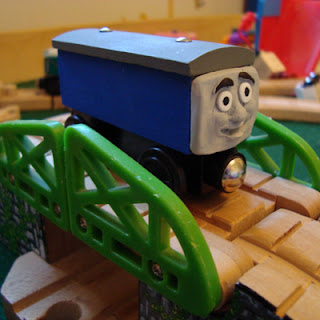 Tonight my 4 year old son and I made a new custom train for his Thomas the Tank Engine train set. This was a fun project for us to work on together and he gets a new toy to play with now as well.

We started with a wooden unpainted Thomas train that we bought for a few dollars at a local toy store. He already has several of these and they're nice additions to his train set since he's been able to paint them himself.

For this train my son wanted one that looked like a Thomas engine so we worked on the painting together. He wanted it to be blue and said that the train would be named 'Clown'. You can't see it in the photo but we wrote the trains name on the bottom in white paint -- just like all the other Thomas trains. I was very pleased that my son was able to sound out all the letters to spell Clown. :)

The face was made from Polymer Clay (I used Sculpey for this model) and styled after the other Thomas trains. Since this is a square shaped train he has a square face rather than the more common rounded faces on the steam engines like Thomas, James and Percy. My son decided that since the train was called Clown he needed a round nose and a big smiling mouth.

Once the sculpture was finished it was baked in the oven for 20 minutes to set it. Sculpey retains a slightly "soft" texture once dried which is perfect for children's toys. Once cool we painted the face a familiar Thomas train grey, then added details for the eyes and eyebrows.

We used regular white glue to attach the face to the end of the train, and I gave it a quick coat of varnish to help stop the paint from wearing off. This is a toy after all, and will likely see a lot of active play. I expect that tomorrow morning it will be busy chugging down the track on the Island of Sodor.