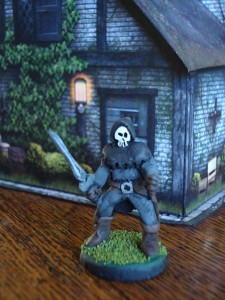 I spent some time this past weekend working on some more polymer clay miniatures for using in D&D or other tabletop games. After my previous model, I decided I'd try to make one that was a bit smaller - closer to the 28mm used for 'man-sized' figures in many RPGs and wargames. I wasn't sure how much detail I'd be able to get with fimo or sculpey, but I have to say I'm very happy with my progress and the newest figure!

The newest figure, the Phantom Stranger, uses a paperclip armature like the earth elemental figure but is about half the height. It's also a much more detailed figure. Working on this mini I learned a few new techniques that anyone interested in making smaller miniatures out of polymer clay might find helpful.

I used a small push-pin to work in some extra detail such as distressing the edge of his hood and bottom of his cape. I also used the pin to cut out a skull shape from a flattened circle of sculpey and then gently placed that inside the opening of the hood. Similarly, I created the belt, buckle, tops of the boots, sword and scabbard as separate "flat" pieces that I cut out and carefully added to the figure. This allowed me to get more detail than I think I would have if I were trying to carve the fimo on the model.

Some very fine detail like fingers or the edge of the sword where it joins the hand were done by carving a line onto the miniature with the pin. 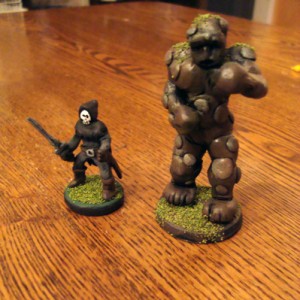 Something else I discovered after finishing this minis is that you can fire your clay multiple times! One the biggest challenges was the armature pulling free of the soften clay as I worked with it. This was really limiting in how much I could handle the minis and how much detail I could add. For my next model I've made a thin coating of polymer clay on the posed armature and will add a second layer on top of that. This will let me apply some pressure while sculpting without worrying about the "bones" breaking through the model's skin.

I've also found some better tools to work with. Instead of just using my hands and a push-pin I now have some plastic modeling tools (shown) as well as some metal dentist's tools. I've also read that if you keep your hands a bit wet you can avoid leaving fingerprints on the model when you touch it. The pin will also be retired in favor of a scalpel for doing very fine work. 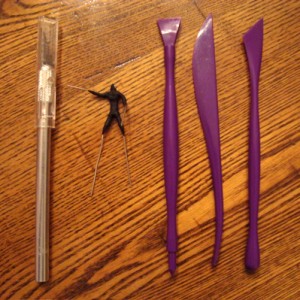